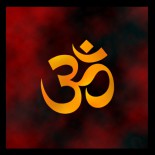 The philosophy of Mother Kali’s eternal dance on Lord Shiva 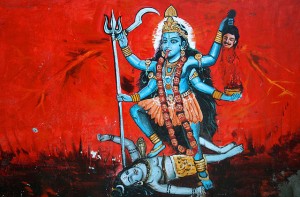 We have all seen the image of Kali at a temple or in a Navratri shrine. This article provides a fascinating insight into who Kali really is!

Kali is one of the best known, but poorly understood Hindu deities. She is dark destructive and terrible in image. She appears allied to the forces of death and destruction. The most common image of Kali shows her dancing on Shiva. This article aims to give an insight into Hinduism’s use of such mystic imagery. It is important for us to have deeper understanding into such aspects of our religion, because it means that our practices will hold deeper meaning and guidance for us in our lives. It is also important to be able to clear misconceptions; I have more than once come across the accusation or misrepresentation of Mother Kali by non-Hindus as being a deity of evil. Hindus will only be able to counter such defamation of our religious traditions if we possess deeper knowledge and understanding.

The Sanskrit word Kali literally means “time”. Kali is the feminine word for time, for which the masculine is “kaal”. Time as we experience it, is the foremost power that defines our existence. Kali is the personification of time and it is not surprising that the deity of time has a terrifying image. After all, time is the slayer of all. Time is the very stuff that our lives are made of – to waste time is to waste life. The reason as to why time is represented in a feminine form is that time is the great womb – the great mother – from which we are all created – therefore it has a feminine quality. Time is also the force which causes all living beings to perish. Therefore Kali is like the mother who destroys the children which she has created – which is one of her frightful features. Yet, through the action of time, Her action, occurs our salvation. Through time, over repeated births, we experience all that we have to and learn all that we must learn in order to merge back into our eternal existence, from which we fell into limited time and space. Kali is the deity of transformation, through worshipping her and accessing her grace Yogis unlock the transformative power which enables attachment and negative tendencies to fall away in the path towards higher states of consciousness and realisation.

Why Is She Dancing On Shiva?

Shiva, in the Shaivite tradition, is the all pervading eternal primeval consciousness of the universe and beyond. It is upon the ultimate, unchanging time-less reality of Shiva, that Kali (time) does her dance, causing the constant cycles of creation, life and death of all things in the universe. Shiva is the substratum upon which Kali acts. Hence, in this part of the Hindu spiritual traditions, the entire cosmic reality is represented by the dance of Kali (time) upon the changeless all pervading consciousness, Shiva.

Does Kali actually have a separate consciousness or is she just a representation of time as an unthinking scientific principle?

Hinduism personifies what to us are abstract spiritual truths as Gods and Goddesses. Spiritual ideas are clothed in concrete imagery, and approached as living beings. This does not reflect a lack of reasoned thinking, or attachment to form, but rather an experiential contact with the higher truths, as living forces. Hinduism creates a personal relationship between ourselves and the forces of the cosmos, and eventually leads us to realise that these forces are within us rather than separate. All forces of the universe are pervaded by consciousness, hence the reason as to why they are approached as living beings is because in reality, they are. The purpose of vivid imagery is that whilst meditating upon the image, our mind is shocked into thinking into the depths of the concept we are trying to understand and know, beyond our usual conditioned ideas. In that way we can really experience the truth of time as an awesome conscious force and understand how our existence relates to it. Kali is a particularly important deity, because by understanding Her we stop identifying ourselves as only our body – we come to terms with the utter impermanence of our body and begin to perceive the true existence of ours which lies beyond – which most people believe but wish to experience directly. Hence she is said to kill the ego – the attachment to pettiness, which is represented in Her image by the severed head she hold in Her hand.

A Mantra For Kali

One important Mantra for Kali is:

Each syllable of this mantra conveys a distinct vibrational energy, and whoever chants this mantra, after a short while will feel that they are tapping in to a deep spiritual energy.

This entry was posted on November 18, 2014 by kkpb8475 in Uncategorized and tagged Hinduism, Kali, Religion, Shiva, spirituality, yoga.